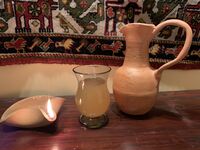 Vindiorix "Black Finn" Ordovix is in NO WAY related to Jack Flynn the infamous poacher known to frequent various forests of the East Kingdom.