(Redirected from User:C A Sizemore)

My mother is Maria Gonzalez she is my father, Corneille Pierre's, housekeeper at his villa in Avilés, Leon. Fathers wife is back home in the Low Countries. While my father has not fully acknowledged me as his heir, he has used his contacts to help me out. First with the priest getting me the position as a novice at a monastery. When it turned out the Church was not my calling. Father introduced me to a ships captain who was looking for able bodied young people and sent me off to join the crew of the Dream Chaser. Meeting Lady Captain Jamie was a shock to a young man of the late 15th Century, raised running wild on the streets of Avilés. For many a year I sailed under Captain Jamie and then when my indenture was done I took my leave in a long forgotten port. I went from trade to trade selling my labor to learn skills and trades. 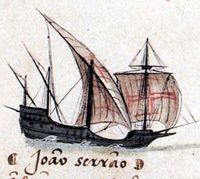 I carry a sword named Clavar (kla·bar) Spanish for 'to nail'. Her name was found at the Market Day at Birka XXIX, where the next day she was used by the Her Royal Majesty, Margarita De Siena, to swear in an officer of state during morning court.


Past Offices
Deputy Web-minster Barony of Bergental May 2020 to June 2021.

East Kingdom Wiki, How and Why do you want to set one up. Novice Scola - 2019