The King's Order of the Time Out 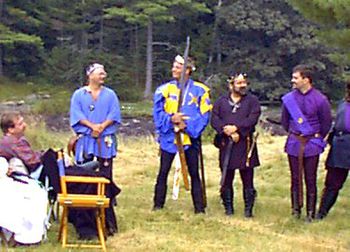 Formation of the King's Order of the Time Out. GNEW AS 35. Photo by Master Maxton Gunn

Balfar and Luna were King and Queen, in July of 2000, and since we weren't working court, Ulric von der Insel and I were sniping the goings-on. Balfar got upset and he called me up to stand aside, in court, and "just shut up."

I remembered Silverwing's Law #23, taken from Tibor's page and compiled by Steffan ap Cenydd of Silverwing, concerning Orders, "Anything a king gives twice is an Order. If the king gives me a dead halibut, he has given me a dead halibut. If, next week, he gives you one, we are now Companions of the Halibut and I'm the principal.

Suddenly I realized that we were an Order and I was the principal. Thus was born The Order of the King's Time Out.

As an aside, at the Last Court of Darius and Alethea, the Queen gave me a scroll declaring that I was now the recipient of a Halibut. Many didn't get it. Now you know.

Companions of the Order