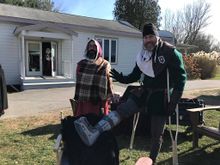 Thaddeus has on occasion declared himself to be a Viking, a 14th century man-at-arms, a Highlander, a Hoplite, an Elizabethan gentleman of fortune and a Norman. His friends have always been kind enough to agree with him and wait patiently until he returns to his senses. When necessary they have applied judicious amounts of rattan, to help him through the rough spots. These days he can be found most commonly in the kit of a 14th century man at arms adventuring in the Italian wars.

Contact can be made through Viscountess Gwenllian Rhiannon of Dragonkeep