The SCA found me in 1994. I was dropped into a fighter practice in what is now know as the Barony of Iron Bog. After our introduction, I found an interest in fighting, dancing (belly), and storytelling. I traded with a group of then gypsies (Scadians with a Romany persona) for my labor and they would help me with garb as well as more knowledge about the SCA. Friendship, family and love for the SCA was born. The longer I was part of the SCA the more that I wanted to focus on who I am and will be come.

My current interest is in pyrography. Some would be more familiar with the term woodburning. True this is an art form just outside of the 16oo’s however various forms of pyrography can be found as early as the first century. At that time use stone and then metal to scrape the charred wood of their fires. I am still doing research, below are just a couple examples including a pic of my first scroll. 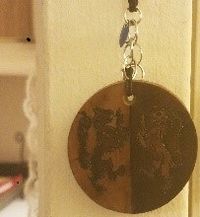 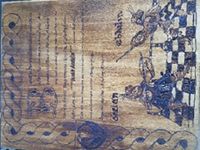