First selected by Darius II and Roxane II. The format for each A&S Championship has varied over the years. In years past the winner of the East Kingdom Arts & Sciences Championship was declared the Queen's Champion and the King's Champion was traditionally selected directly by the King from among the entrants. Over the last few years, the Crown's champions are both chosen from amongst a group of high scoring finalists after an interview.

Please see East Kingdom Law for the duties of both Champions.

The Sovereign's and Consort's A&S Champions' regalia consists of a sash and a Chain of Office. In August 2022, Baroness Bronwen Rose of Greyling told the history of the Chains of Office to Ysabel da Costa thus:

The current Chains were made by Master Tristan de Worrell of Dragonship Haven in 2013 and 2014.

The original K&Qs A&S Champions’ regalia were solid cast pewter tigers linked by brass-plated steel lamp chain, and were made by an artisan from the Shire of Nordenhal. They hint at a peculiar sense of humor. Queen’s champ’s tigers were about 2”x3” and King’s Champion were about 6”x7”.

Tristan got to wear the about 4 pound of pewter collar when he was named King’s Champion Jan 6, 2007 by King Lucan for his entry on Elizabethan spoons. His long-time partner, Renye Wurm, was named Queen’s Champion at the same event. So they each got firsthand experience with maintaining and wearing that version of the regalia.

In 2013, (now Master) Tristan designed and completed the new collar for the King’s Champion. I believe that Master Luke Knowlton was the first to wear it. The companion piece for the Queen’s Champion was completed and presented several months later.

Both collars were constructed of linked rectangular brass and blue enameled plaques and filligree medallions with an elaborately pierced fine silver pendant representing the SCA’s A&S stylized lantern. Master Tristan was an accomplished metal worker and enamelist.  He took great joy in using his jewelers saw and he truly loved polishing.

The enamels are constructed using the 2-plaque technique where the top pierced piece is soldered to a solid backer sheet and the resulting wells are filled with powdered glass then fused in a kiln. When the wells are completely filled, the metal and glass are ground to a level surface, refired to bring gloss back to the glass, and the metal is polished. A lot.

Master Luke added a clever chain arrangement to shorten the collar of the Sovereign’s Champion’s collar and you (Ysabel) have applied a blue fabric backing (to both collars). That is a good idea to limit metal tarnish from staining skin/clothes and brass links from tangling with lace trim or hair. I recall that a couple of extra plaques and brass links were included with each collar to effect any needed adjustments and repairs.

Master Tristan died about 2 years ago. 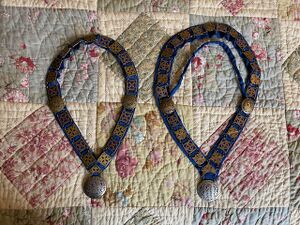