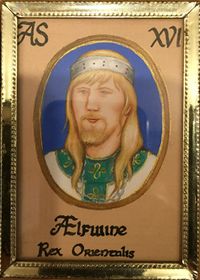 The portraits cover reigns 24 (1979) through 39 (1987). Reigns 40 and 41 are covered as well since both are repeat winners of crown. Additionally, there is a portrait of Jehan de la Marche (reign 9), but not one of his Queen. Each royal has a single portrait, no matter how many times they sat the throne.

Most of the portraits are paired together in hinged frames. The exceptions are Kunegunda, Hasdrubal and Amber, who form a triple frame; and Hanno, Viktor, Embla, Jehan and Tamera, who are each single frames.

The paintings were all done by Maven Whitlocke (known then as Katja Hjalmarsdottir) with matting and calligraphy by Arthur of Linden. The project took place over a period of several years during the late 1980s. The techniques and style used are from the 16th century. Maven had read a book on the history of miniature paintings which included a section on "how it was done", and decided to give it a go.

The earliest pieces were those with the black mats. Later ones introduced the additions of the calligraphy and the drapery effect seen in red and purple.

The paints used were Pelikan cake gouache (opaque watercolor), in a 24-pan set, and a range of medium-to-very-small Kolinsky sable brushes. No magnifying equipment was used.

A few of the pieces are believed to have been lost to water damage or in the case of Aidan ni Leir's - taken by their subject. 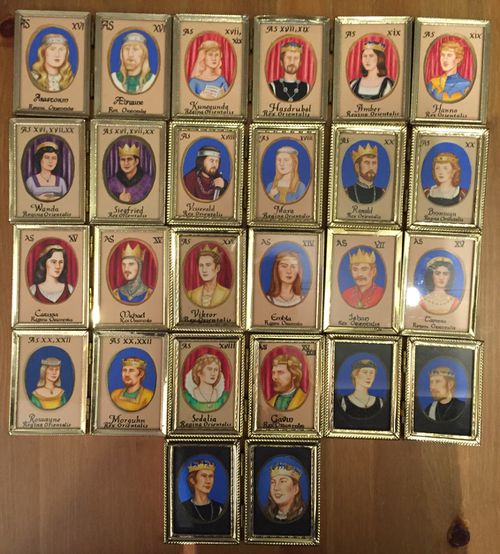 Listed in the order they appear in the photo.