This is one of my first beers entered for EKBG paneling. The documentation isn't my best, but a start. 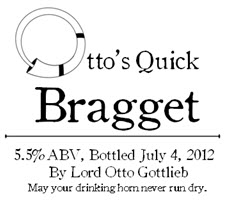 Braggot (modern spelling) is a very old style. It was traditionally made with ale (no hops), either strong and new or re-boiled with sour ale and some new ale, with honey. Spices would be put into a bag and added during fermentation in a cask and would mature in 3 to 4 months. According to Sir Hugh Platt, “wherby you may draw the same fine presently.”

The purpose of Otto’s Quick Bragget was to make a sweet honey ale, spiced with period ingredients, that would take less time to mature and have a shelf-life of more than a couple of weeks. At 40% of the fermentable sugars, the light dry malt extract forms a light ale base for the %60 fermentable sugars from the honey. Light crystal malt was added for a caramel malt sweetness to balance the honey. East Kent Goldings, a low alpha-acid hop, was used for preserving the ale (technically making this a period “beere”), imparting only a slight bittering character. This bragget emphasizes the period selection of spices. In his documented recipe, Sir Hugh Platt called for:

According to Randy Mosher, “In other recipes, mace and nutmeg replace the pepper and galingale.” I have not yet discovered these other sources, but continue to search. Therefore, I used his list of spices and proportions provided in “An English Bragot, c. 1500”. I was fortunate to find longpepper when I needed it; Lord Gwillim Kynith, another Endewearde Brewers’ Guild member, had about an ounce available to loan. I was able to find galangal at a local Thai restaurant. Cinnamon, candied ginger, and cloves were easy to find at my local natural foods store.

Renfrow, Cindy, 1994. A Sip Through Time - A Collection of Old Brewing Recipes.