Five parts cinnamon, three parts cloves, one part ginger; half of the wine must be white and half of it red, and for one azumbre, six ounces of sugar, mix everything together and cast it in a small glazed earthenware pot and give it a boil, when it comes to a boil, [cook it] no more, strain it through your sleeve often enough that it comes out clear.

This hippocras recipe is fairly straight forward. For “parts”, 3 ounces of cloves is A LOT for the volume of wine specified. Instead of relative weights, I decided to estimate the relative volumes of spices. I used five parts cinnamon, three parts cloves, one part ginger, and 6 ounces of sugar in “one azumbre”, or about 2 liters, half white wine (Pino grigio) and half red wine (Pino noir). The combination of red and white wines is a bit unusual in the same hippocras recipe.

This recipe stands out because of its explicit description of preparation. As noted, I mixed the spices, sugar, and wines together in a glazed earthenware pot. At the time, I did not have a medieval period earthenware pot, but have a post-period one. I heated the ingredients over a fire until it came to a boil then removed it. After the pot cooled a bit, I strained the liquor through a linen sleeve a couple times until it was clear. (I sewed the sleeve myself.) I brewed and bottled the hippocras on July 27, 2017. It is decanted into a white stoneware pitcher, based on an extent piece from the Rhineland region of Europe for export starting in the 14 to 15th centuries and made by Eadric the Potter.

The simplicity of this recipe is notable for two reasons. First, spiced wine is described by Pliny the Elder in the 1st century AD. It later appears in The Forme of Cury (1390) and Le Ménagier de Paris” (1393). Then again in the Catalonia region of Spain (Barcelona) in 1520. Good things persist and spread. Second, while the ingredients are simple, the recipe calls for a blend of red and white wine and explains the preparation process in greater detail than in other early versions of hippocras. It does not specify whether to serve the drink warm or cold, but German/Austrian “Gluehwein” is so named because Romans are said to have heated the sweet, spiced wine with “glowing” hot irons from the fire. Therefore, there is precedence to serve this “mulled wine” warm or cold. 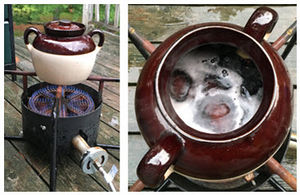 Hieatt, C.B., A Butler, S. 1985. Curye on Inglysch: English Culinary Manuscripts of the Fourteenth Century (including The "Forme of Cury"), pg. 148. Oxford University Press for the Early English Text Society.