Naomi bat Avraham has been in the SCA since 2002 and lives in the Shire of Hartshorn-dale. She was drawn in by the archery but found many other interests, mostly in the arts and sciences. Her main interests are currently woodblock carving and printing and researching the history of European printing. In 2015 she was honored by being chosen as the King's champion of arts and sciences for her project on the history of European woodblock printing. She is always looking to learn new arts and sciences and loves teaching what she has learned. Naomi also has an interest in East Kingdom history and helped with the East Kingdom 40th anniversary history display, which was taken and displayed at as many events across the Kingdom as possible. In 2011, she put together and ran a Pennsic history display at Pennsic 40. As part of this history display, she designed a map of the Known World. She updated the map in 2020 to be part of a Society newcomer's packet. 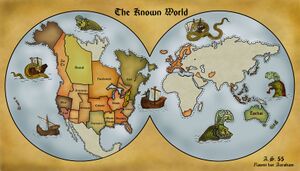 Naomi bat Avraham is a Jewish woman living in 15th century Germany. Her father is a Hebrew scribe so she grew up around words and books. She and her husband own a print shop useing the relatively new printing press and movable type. She primarily carves woodblocks to illustrate the printed books, but occasionally sets type and operates the printing press.