This is a placeholder page for wordsmithing portfolio by Montgomery Josh while I learn Wordpress. This content will be moved over to there if/when I get it working.

Scroll Text SHHHHHHHH It's a surprise!

Scroll details to be added once submitted

Scroll words for --SURPRISE-- Order of the Silver Crescent, submitted to scribe 8/25/22

Scroll Text SHHHHHHHH It's a surprise!

Queen Boudica, Warrior of the Iceni Tribe of the Ancient Celts bravely led rebellions against the Romans, defeating them three times before her army fell in 60 AD. She was a larger-than-life woman known for her great intellect and cunning. It is said her piercing glare could cause opposing armies to turn and run away. So great of a woman was she that we still tell her tales and sing her songs some two thousand years after her death. To this day, the word we use to describe someone with her qualities as “Bodacious”.

Today, we celebrate a true son of these Celtic traditions: an unabashedly bodacious and accomplished man whose own songs will be sung in the fighter’s camps at this and future Pennsic Wars. The brave and noble Pádraig Ó Brádaigh. A bear of man who has served with distinction in myriad roles including Seneshial, Exchecquer, and Champion. A man who reforged himself in the furnace of the plague, work hardened himself into an even stronger and more formidable combatant across multiple forms. A shining example to our next generation of fighters as the Best Squire in the Known World.

We, the Demon King of the Three Heavens Ryouko'jin Of-The Iron-Skies and the Rani Indrakshi Aani Aravinda have observed how Padraig has earned the respect and admiration of his peers on and off the field of battle and through his strength of character and service to the Society. He can disarm his opponents with a rattan weapon or his quick wit. He brings his intellect from the chess board to the battlefield, looking ahead to his opponents next moves. In this Year of the Tyger, he has demonstrated himself a fighter with the heart and mettle of the fiercest Tyger. He embodies those qualities that make him an heir to Queen Boudica. He represents the best that the East Kingdom has to offer both the Scadian and Mundane Worlds. Even if he cannot sew in a straight line to save his lucky charms.

Pádraig Ó Brádaigh is already known for his accomplishments as a man, now hence forth and throughout the Baronies and Shires of the East Kingdom may he also be known as a Companion of the Order of the Tyger’s Combattant. Given this at this Great Pennsic War 49, in the Year of the Society LVII.

In honor of this great achievement and his love of the chessboard and rattanic arts, we dedicate “White Squire”, a light-hearted Filk written in honor of Pádraig Ó Brádaigh. Original Song, “White Rabbit”.

When weapons and your armor Feel like heavy lead And the Herald is talking backwards And the Rattan strikes your head Remember what your good Knight said: You’re con-cussed You’re con-cussed 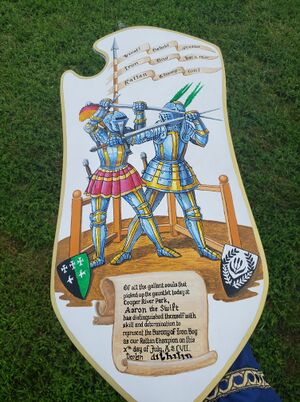 Vivat! Behold genteles, Iron Bog has a new Rattan Champion! Of all the gallant souls that picked up the gauntlet today at Cooper River Park, Aaron the Swift has distinguished themself with skill and determination to represent the Barony of Iron Bog as our Rattan Champion on this 10th day of July, A.S. LVII 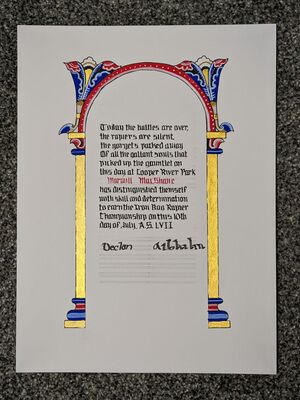 Today the battles are over: the rapiers are silent; the gorgets packed away. Of all the gallant souls that picked up the gauntlet on this day at Cooper River Park, Morweil MacShane has distinguished themself with skill and determination to earn the Iron Bog Rapier Championship on this 10th day of July, A.S. LVII

Legends aren’t simply born. They are forged from the hearts of the bold on the endless practice fields and throwing ranges and stables. Heated as competitors line up in the crucibles of glorious combat. Quenched as two sets of eyes make contact, waiting for the marshal to begin. Hardened as each competitor takes that first breath and releases the drawn arrow or lands a first strike with the rattan sword. Tempered by the fellowship of both the victorious, the vanquished, and those spectating celebrating time together again.

If you are awakening from the long slumber of the plague and looking for a local weekend-long festival that goes far beyond heavy fighting, the Barony of Iron Bog invites you to join us for the Olympic River War 2022 where the Baronies of Bhakail, Buckland Cross, Carillion, Iron Bog, and Settmour Swamp will compete in fighting, fencing, equestrian, throwing, and even the bardic arts. We call on all warriors and artisans seeking glory for their baronies to throw their favors into the hat.

For those who bring honor and glory to their barony through arts and sciences we will have myriad classes to teach and learn about the skills that keep the SCA fed and clothed and knowledgeable about our period.

For those who are focused on training the next generation of Scadians to earn their own honor, this event is youngling and padawan friendly with children’s events and even a chariot race. You may also bring your gallant furbabies, as long as they are leashed and you police their fecal matters for no knight or squire alike likes to step in a surprise.

And for those who revel in the merriment of night-time activities, we offer structured events like bocce and torchlight tournaments. Those who prefer to filk around a campfire, you are free to enjoy the beverage of your choice as long as you are discreet for our gracious hosts at the fairgrounds do not permit open containers.

Although the SCA complies with all applicable laws to ensure the health and safety of our event participants, we cannot eliminate the risk of exposure to infectious diseases during in-person events. By participating in the in-person events of the SCA, you acknowledge and accept the potential risks. You agree to take any additional steps to protect your own health and safety and those under your control as you believe to be necessary.