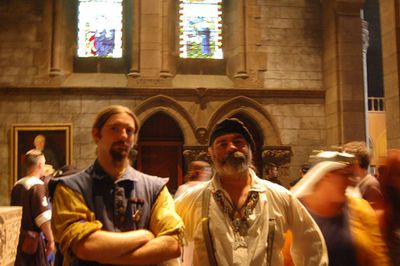 Matteo (known almost exclusively as Teo) has been involved in the SCA since early 2006. They were first pulled in by the idea of historical rapier combat in the Barony (then Shire) of Endewearde, and their love for the SCA has only expanded from there. They have excelled at making cloaks to be used during rapier combat, and takes commissions for them. You can read their SCA blog Here, which is updated very infrequently. Teo prefers to use no titles to denote their rank, and prefers gender neutral pronouns (though will not be offended at the use of masculine pronouns and titles).

Teo is a gentle from the 14th Century Sangro Valley area of Italy. Garb choices consist of whatever fits, whatever they think looks good, and the occasional Romani dancing skirt.