Invested by Thorvald and Svava on January 15th, A.S. XXXIX (2005) at Bellringers: the Investiture in the Barony of Carillion.

Stepped down: on September 21st, A.S. XLIII (2008) at Lakewood Renaissance Fair in the Barony of Carillion. 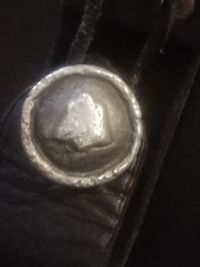 Mary's golden chime was a pewter button created by Master Aaron the Arrowsmith.