In spring of 2013, Grimkell was walking through central park and came across Conandil Ingen Donngaile and William Bornander at Belvedere Castle dancing. He inquired about the dancing style and they ultimately told him about the SCA and told him where he could find a number of local events and the local fighting practice. 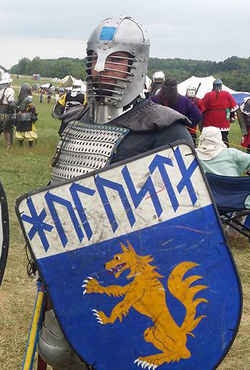 Kveld-Grimkell gylðir was the son of a Danish farmer. Not content with working the land, he set out on a number of raiding voyages. One such voyage took him to Spain where he was captured by the Moors. In captivity he met and befriended Jibril al Dakhil, the son of the local baron. After his ransomed return to the Danes, Grimkell began to wander Northern Europe. Eventually making his way to Germany where he once again crossed paths with Sir Jibril al Dakhil, now a knight of Saint Adrian. Rekindling their friendship, Grimkell chose to squire under Sir Jibril al Dakhil and join the Order of Saint Adrian.