For the Widow Montoya, the year is 1179 in the kingdom of Leon on the Iberian peninsula during the reconquista.

Jimena is a member of House Bellatrix [1] and is squired to Duke Paul of Bellatrix.

Her professional research explores the literature of England from the middle ages through the Restoration with an emphasis on Renaissance drama, particularly revenge. She generally teaches a class or two on her professional interests at Pennsic, but is happy to share her research or teach a class on Med/Ren English lit and culture by request. She is also happy to consult on scroll wording for English personas, and can do some work in Old English and Middle English as well as Early Modern English (Norman French enquiries can be muddled through, but would be better addressed to someone more proficient unless modern French wording is acceptable).

Gules, a demi-maiden in her modesty and on a chief embattled argent three mullets of eight points gules.

(also) Gules, a demi-maiden in her modesty and on a chief embattled argent a sword fesswise gules.

trans - For honor and joy

Always, when I see a deed of honor,
performed in battle or in peace,
my heart dances to know that this courtesy
must create only more honorable things.
For honor has this power in itself:
that neither envy nor bitterness occur
in the hearts of those who are nearby
when honorable behavior is seen.

Often, the sight of examples of chivalry,
in comparison with my own behavior,
also humbles me with desire.
Because the vision of courtesy
fills me, and I burn with the need
to act with honor as my example. 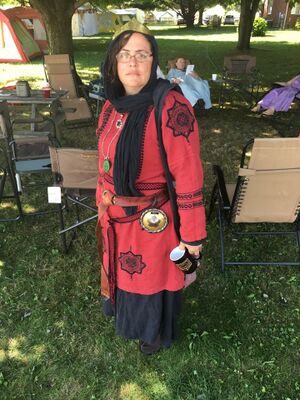 The widow in her natural habitat - Pennsic
Retrieved from "https://wiki.eastkingdom.org/index.php?title=Jimena_Montoya&oldid=98441"
Categories: