Jack Flynn made his appearance in the Shire of Mountain Freehold in the Autumn of A.S.LIII and immediately began poaching the royal deer in Duchess Marieke van de Dal's lands. The Duchess called upon the Foresters of the East Kingdom Foresters Guild residing in the Freehold to track down the horrible lout and bring him swiftly to justice. Marieke and the other Royal Foresters spent a bright October afternoon reading and following the tracks of Jack Flynn through the forest and quickly apprehended him. In her great wisdom and kindness, Marieke decided to grant Jack Flynn mercy and a chance to reform his ways. However, rumors of his recidivism are beginning to spread among the Freeholders...

In A.S. LVII Jack Flynn was rumored to have fled to the Barony of Endewearde where he took up his old ways. The East Kingdom Royal Foresters Guild put out a call to hunt the poacher down at the Endewearde Hunt, and he was found, captured and run into court. Since he ran from the Freehold, ran from the Foresters, and ran from the Crown, Her Majesty Brehennes Corotica wanted to see how well he ran now, and called for the Children of the East to run him aground with the Royal Toybox. It is unknown at this time if there is anything of Jack Flynn left, but one young child was seen carrying around his moustache after he was downed.

Jack Flynn is absolutely, positively in no way related to Black Finn (Vindiorix Ordovix), although the resemblance is strikingly similar.

Among his crimes, Jack Flynn is known for poaching, theft, not washing his hands, littering, public drunkenness, and talking in the theatre. 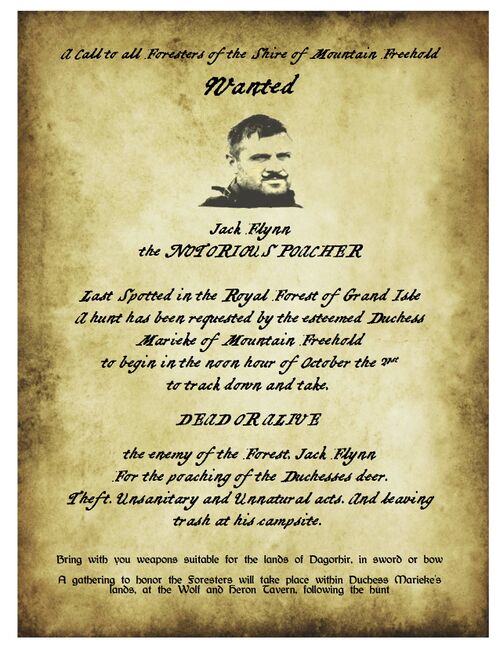 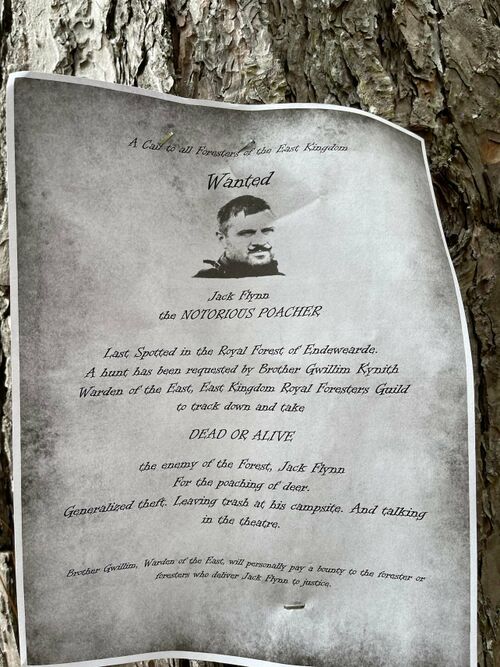