Hanim Islah bint Abbas ibn Habib ibn Hasan, OP attended her first event, Quest, in 2000. After a few more events and Pennsic 33, she became active in the SCA with the Canton of the Keep by the Endless Sea in the Barony of Carillion in 2004 as Luned Gwyn, her retired persona. She has served as Canton Exchequer, Baronial Seneschal twice, Southern Region deputy Seneschal of NJ, Editor of the EK Gazette for NJ, and most noteably as Baroness of Carillion. At events, she is frequently found in the kitchen or at the troll table. Islah enjoys researching historical clothing and has made an extensive list of garb for gentles from newcomers to royals. She is a member of the household Erlendsstaðir and is currently mentoring her Protégé Dróttin Randver Kveld-Ulfr. 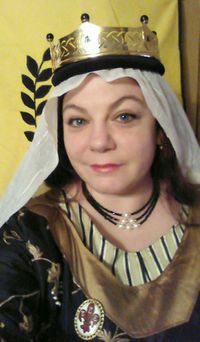