I am only child of a member of the Byzantine Emperor's personal Varangian Guard & a noble heiress from the remote island of Therasia (Θηρασία) in Byzantine Empire. Her name translates to Violet colored dawn Daughter of Wulf.

Iola learned all her merchanting skills at her mother's side. After her father's death during the Crusades, the subsequent seizure of her family estate & her mother's death from a broken heart. She became a ward of the Emperor, until she was forced into a political marriage, which was thankfully cut short due her husband tragically being lost at sea. Iola had no choice but to fall back onto her training and become a soap merchant/trader. Eventually making her way through Europe to reunite with her father's family in Norway. She is at most times at her soap booth or assisting with her heralding duties. She is known in many circles as "The Soap Lady". 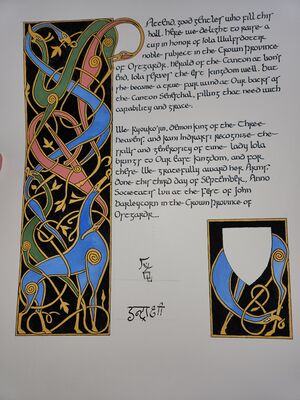