Master Iheronimus Brückner (FKA Oohashi Katsutoshi-dono), has been in the SCA since the Spring of AS XIX; when he and his Lady wife, Mistress Caitlin fitzHenry, went to their first event in Caer Mear (Atlantia). In the Summer of AS XXIII, they moved to Quintavia in the Kingdom of the East. In XXXVIII, Carolingia renegotiated its borders with Quintavia, and their lands are now in the Canton of Aschehyrst. Due to mundane life changes, Iheronimus is currently residing in the Barony of Unser Hafen in the Kingdom of the Outlands, having moved there in the early summer of AS XLVI to be with his Lady wife. 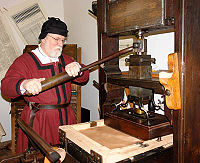