Kennari Hrafn Breiðskeggr, OP. My first event was West Windsor Renaissance Faire in May 2004, since then I've immersed myself in my Barony and armored combat. Currently as East Kingdom Combat Archery marshal, Seneschal of the Canton of the Keep by the Endless Sea, and heavy marshal at large. 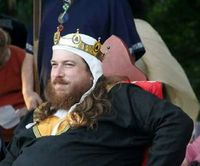