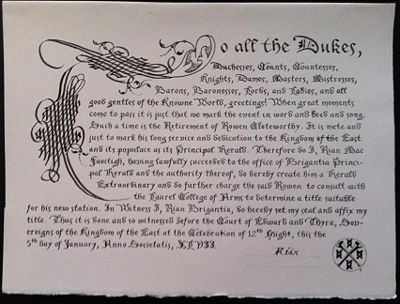 The Rank of Herald Extraordinary is a rank bestowed upon a senior herald to recognize their extreme service to the College of Arms. It is exceptional in all the Society in that it is one of the few awards to not be the right of the Crown to bestow. It is, instead, a rank bestowed by the Kingdom's Principal Herald on behalf of the Kingdom's College of Heralds or the Laurel Sovereign on behalf of the Society College of Arms. It does not convey any precedence.

This rank enables the recipient to register their own personal heraldic title. Once their title has been registered, the Herald Extraordinary may then be referred to using this title, in the manner of period heralds. For example, Master Ernst Nuss von Kitzingen has the personal title of Coach Herald Extraordinary. He is thus referred to by others in the College as Ernst Coach.

The rank of Herald Extraordinary dates back to the Letter of Acceptances and Returns from July 1981 and was created by Master Wilhelm von Schlüssel, then Laurel King of Arms.

TO: The Members of the College of Arms

The rank that I have decided to add is that of Herald Extraordinary. This is a rank in use in England today, whenever they create a Herald's post for some occasion that is not to become a permanent position on the-College of Arms' roster. The rank of Herald Extraordinary shall be permanent so long as the holder continues to remain active in SCA heraldry. Each Herald Extraordinary shall have a title that is his/her own personal title that s/he shall hold so long as s/he remains active. If s/he should retire from the SCA, the title shall retire with her/him and shall not be used again by anyone else. Such titles must still clear my office. Kingdom Principal Heralds are responsible for elevating heralds in their kingdom to this rank, as they are responsible for all other ranks within their kingdom. This rank is reserved for those heralds who have greatly served the College of Heralds and/or the College of Arms and have achieved the highest level of competence in heraldry. Such a rank shall have no fixed duties, unless such shall be agreed upon by the holder and the Kingdom Principal Herald, but instead the holder of the rank shall be a senior member of the College who shall lend heraldic expertise as s/he sees fit.

To start this rank off, I hereby award it to two of our longest contributing members. First is Master Ioseph of Locksley, the first Aten Principal Herald and the second Laurel King of Arms. He will continue to be Laurel Emeritus, and may submit to me a personal title if he so chooses. The second is Master Alfgar the Sententious, who has served the heralds for over ten years nonstop both as Brigantia Principal Herald and as Virgule Herald. I hereby make Virgule his own personal title. He shall continue to hold the rank of Herald so long as he remains on the Laurel Staff and comments on letters, and when he finally tires of that he shall be Virgule Herald Extraordinary so long as he remains active in the SCA. To both of you, thank you on behalf of the College of Arms for your contributions and three cheers!

Eastern Extraordinary Heralds and their Titles