Hakan found SCA during a Demo at his local LARPing site, Bicolline. Held by Mo and the Al-Karakal household, the fights were so nice, he was instantly hooked. 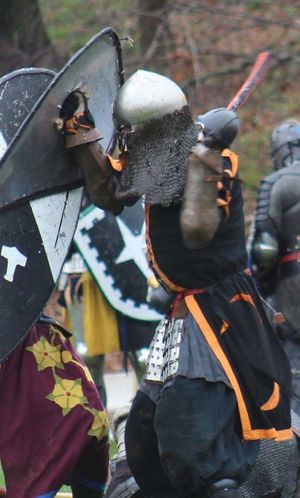 Hakan is from the Al-Andalus region of Spain in the 13th century. He's from a good but very modest Christian family. By the age of 12, he lost his parents in one of the many conflicts. He was sold as a slave and sent to the Cairo, in the Mamluk Sultanate. His physical aptitude and good health put him in the selection for the future Mamluk draft.

During his time in the Cairo he was taught how to read and write Arabic in order to study the Koran and the Furusiyya which he did. He grew among various religious, arts, and war teachings, and became a renowned fighter, a guard and defender of the Egyptian Sultanate in the Al-Karakal Household.

His skill as a fighter, artist and teacher eventually lead to a gift of land and the status of lord and advisor in exchange for his good and devoted service to the realm.