I have been a part of the SCA since AS 44. My girlfriend at the time (now my beautiful wife) told me about the SCA and insisted that I join her at Pennsic 38. It was my first event and there was so much going on that it took me until Pennsic XL before I started to find my footing in the SCA. I found enjoyment in volunteering. I have been active in mulitple baronial office positions in multiple baronies. I have run fencing practices in Beyond the Mountain and Bridge. I have also been the herald of Beyond the Mountain and am currently the deputy herald of Dragonship Haven. I enjoy martial activities and making sure others can enjoy them as well. I am currently a herald-at-large, fencing marshal, youth fencing marshal, thrown weapons marshal, and a marshal in training for youth combat.

Most recently, I have an interest in beginning armored combat and picking up my bow again.

Timothy Barre Wollffe was a privateer and considered one of the English Sea Dogs, as they were disparagingly called by the Spanish authorities. He was given the consent and sometimes financial support of Elizabeth I of England to attack and plunder Spanish colonial settlements and treasure ships. He was made a Captain by Ryouko'jin and Indrakshi for his prowess in battle and service to the crown in A.S. 57. 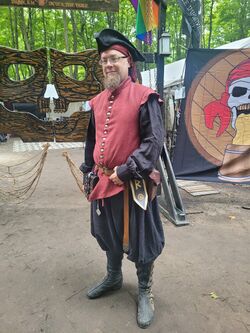