Golden Knife of the East

The Golden Knife is a symbol of prowess (and only prowess) in Knife throwing within the bounds of a particular Kingdom. Currently there is one Knife active in the Society - in the East Kingdom. As the Iron Ring of the East has become a popular way to bring the Rapier community together, the Thrown Weapons community in the East Kingdom has decided to take a similar approach and create the Golden Knife of the East, Golden Axe of the East and Golden Spear of the East. Please don't confuse these with the Golden Lance of the East, which is an Award for prowess in the equestrian lists and demonstrated service to the Kingdom in marshalling, teaching, and helping to promote and expand the knowledge of equestrian arts. 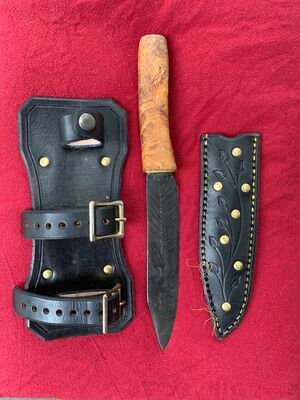 How to acquire the Knife

The only way to acquire the Golden Knife of your Kingdom is to challenge the current holder. The format of the challenge is fixed and shall be strictly followed to insure this does not alter from its original intent:

The Golden Knife may only be exchanged once in any given day; if another challenger requests a Challenge to the new holder on the day they have won the Knife from another, the holder is required to decline the Challenge. Otherwise, the holder may accept up to three Challenges in a given day, assuming the holder is the victor of each preceding Challenge that day.

A challenger for the Golden Knife may only issue a single challenge per day.

Weapons must be SCA and East Kingdom legal. If it looks like an Knife and throws like an Knife, it's an Knife. Only the competitors can determine if something is fair or not.

The Golden Knife may not reside outside of it's Kingdom's borders. As such, it will revert to the previous holder if the current holder moves from the Knife's home kingdom or stops playing.

The Golden Knife shall be displayed prominently while at events and practices so potential challengers may know who is the current holder.

Lastly, it is the duty of the outgoing holder of the Golden Knife to make sure the incoming holder is fully aware of these rules.