I am Genovefa Clerica Baronne de l'île du dragon dormant. My duty done, as of March 2nd 2019, I will retire to the convent, but I will not be alone, the people of this barony will be in my heart forever. While I will now be in service of god, I do not forget my duties, therefore I name Евгения Чудка Пищанова (Evgeniia Chiudka Pishchanova) as my official emissary, she will relay all messages to me and deliver all scrolls and official documents.

- - - - - - - - -> What this means is : I wish that Genovefa Clerica keeps receiving ALL awards and prizes even if I will mainly portray this slavic persona.

She was sent by her father at a young age to serve in the house of John of Salisbury. Her sister, Jeanne de Robin sent for her after theirs father's death. She did as duty called until she was sent back to the convent to finish her noviciate and pursue a life of contemplation and studies.

In 984, the Radimichs tried to break away from the Kievan Rus, but were defeated on the Pischan River by Vladimir the Great's commander Volchiy [1], the remaining Radimichs found a young Chud girl (Finnish). She was named Chiudka (Чудка) for her etnic background and for the "wonderful/suprising" (чудной) turn of faith that kept her alive. When no kin came to clame her, she was named after the place she came from: the Pishcan river.

to be entered at later date 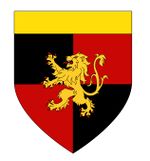 House of Kingsbury, Quarterly sable and gules, a lion salient and a chief Or

I have an anxiety disorder, I do not like surprises.

I prefer to know in advance if possible.

Because I prefer all awards to be given to Genovefa, even if I portray Evgeniia Chiudka. Please call Genovefa into court, Evgeniia will present herself as Genovefa's emissary into court to receive the award.