Frasier MacLeod started his SCA career in Endewearde in the late 1980's. He spent some time in AEthelmearc, where he was made the 8th White Scarf. He returned to the East and is now a Premiere of the Order of Defense. 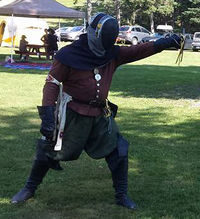 Frasier was born in the Year of our Lord 1537, second son to his father, chief of Clan MacLeod. As young boy he roamed the halls of Castle Dunvegan, perched on the cliffs high above the Firth of Forth. He left home as a teenager to seek his future. Frasier signed onto one of Her Majesty's privateers, which is where he learned to fight.