I am a dabbler in the SCA, I like to at least 'try' as much as I possibly can.

And anything else I can readily try...

I recently moved from the East Kingdom to Aethelmarc and am no the Seneschal of the Shire of Wyntersett and the Accessibility Porter for the Kingdom of Aethelmarc.

I am originally from Venice Italy. The youngest of 6 daughters of a Byzantine refugee family now living in Venice. My father was a Venetian Merchant. I have never been a conventional daughter of my time. I worked hard for my father's business and is very learned at accounting and legal matters pertaining to her father's business.

As a result I traveled with my father and was married to Merchant named Ala Madre Kassir of Damascus. I traveled on many of Kassir's trips through Europe regarding business dealings. When in Damascus, however, I was regulated to my apartments and with only the company of a single guard (a Scottish Mercenary named Adam McGregor). But the marriage was short-lived as Kassir died only two years after we were married. Kassir's adult son Abdula made arrangements to have me sent home to my father. Word was sent back from Venice to have me board the next ship for England instead. Where I was to meet Lord Montressor, who would take care of me for a time and find me a new husband in a more (liberal) England.

During their business dealings with their Shipping Co. Lady Montressor met a ship's Captain and they married, although short lived their marriage introduced me to my 2nd husband, Lord Rooke Theodoric, the Captain's Bosen. After 8 long years of marriage Lord Theodoric drown when his ship sank. 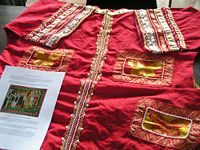