Fernando de Rivera (also known as "Nando") started in the SCA by going to the Great Northeastern War 29. He became a member of one of the clans of Rolling Thunder and by GNEW 30 has fully immersed himself into the SCA world. He enjoys brewing, cooking, silversmithing, and general shenanigans. His first taste of battle was at GNEW 32 fighting at two of the bridge battles. Typically you can find him camped among the clans of Rolling Thunder where he is either playing the drums or cooking.

Born in the late 15th Century, Fernando de Rivera is a Spanish merchant.

Nando's passions within the SCA are brewing mead and silversmithing. He entered the world of brewing by participating in the GNEW potables competition in 2014. From there, he has participated in several of the roundtable competitions held each year. Silversmithing came naturally since at a very young age, Nando was already a learned jeweler being an apprentice in the mundane world. He dedicates his craft to making things for people and events. 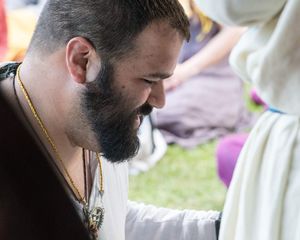