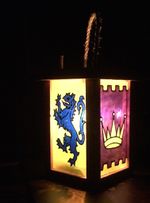 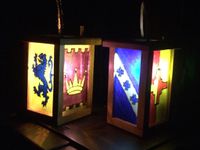 As part of the EK Royal Beautification Project household Equus Celox made a set of 12 faux-stained-glass lanterns for the courtyard in EK Royal at Pennsic. These lanterns were to be hung on existing black metal commercially available "shepherd's hook" hangers. The lanterns were based on Mistress Eleanor fitzPatrick's personal lantern, shown above, which was in turn based on a lantern design from Master Terafan Greydragon. The construction method for both Eleanor's lantern and the EK Royal lanterns was identical, only the proportions were changed to better compliment the chosen artwork. An Eastern Crown and Tyger were the obvious choices for decoration. While the Tyger is usually drawn statant (standing on three legs with one raised), a rampant Tyger fit better in the space. The crenelations top and bottom on the Crown panels were added for artistic interest. 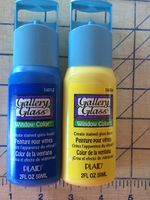 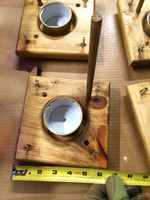 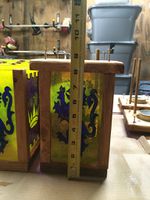 These lanterns are Master Terafan Greydragon's lanterns, with a few changes. The size of the glass panels was increased to 4 inches by 7 inches and the wood pieces resized accordingly. The decorative side panels described in Master Terafan's instructions have been left out entirely. Master Terafan appeared to have built the top and base of his lanterns from plywood. The lumber for these lanterns was all leftover pine boards that Baron Duncan Kerr planed to the appropriate thickness. The only tricky part of resizing the design was to be sure to not cut the notches into the vertical pieces so deep that the inner corner became detached.

Plexiglass was used because because Mistress Eleanor fitzPatrick's father had a few large sheets of plexi that was too obscured to be used for their original purpose. The lanterns could just as easily have been made with glass, though they'd be more fragile. Plexiglass is easily obtainable in a variety of sizes at any large home improvement store such as Home Depot or Lowes. While you should take care to cut the plexi panels into true rectangles instead of trapezoids it turns out the design is fairly forgiving of minor flaws.

The paint used for both Mistress Eleanor fitzPatrick's lantern and the EK Royal lanterns is Gallery Glass brand paint from A.C. Moore Crafts. The EK lanterns used colors 16012 Royal Blue, 16004 Sunny Yellow, and 16457 Plum. Both lanterns used the Gallery Glass brand Liquid Leading in black. Eleanor's lantern leading was applied straight from the bottle, the EK lanterns' leading was applied with a henna cone by Isabella Natale as she is an accomplished henna artist and found it easier to work with. Other than that, the paint was applied according to the manufacturer's directions - first the leading applied and allowed to dry fully, then the colors filled in. Be warned - the manufacturer claims a 28 day drying time before these are waterproof unless they are heat-cured. Heat-curing plexiglass was a risky endeavor though required for this project due to not realizing how long drying would really take.

Mistress Eleanor's lantern's plexi panels were roughed up with sandpaper on the side facing the interior of the lantern and then painted on the smooth side. While this did give a nice frosted effect to the portion of the design that needed to be white it was not necessary to the success of the project. Since Mistress Eleanor's lantern was made to hold a battery powered Coleman lamp, she wanted to be very sure that the interior of the lamp was obscured.

The courtyard lanterns were a surprisingly large undertaking. Isabella Natale did the leading on all 48 panels, then Eleanor fitzPatrick, Isabella Natale, Alanna of Skye and Aeryn fitzPatrick filled in the color. Baron Duncan Kerr and Mistress Eleanor's father calculated all the sizing for the wood pieces then did all the cutting and sanding and most of the assembly. Eleanor stained all the pieces and completed the assembly with the plexi panels, internal lift mechanism and rope handles.