Chronicles of the East Kingdom 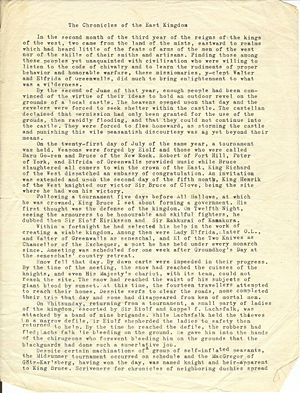 From the reference "...El of the Two Knives as Chancellor of the Exchequer, a post he has held under every monarch since." we can place the time of its writing to before October 1972, when Wilhelm of Bothnia took over the job of Exchequer.

The document does not end cleanly, so we can only assume that this is just the first page of a longer manuscript.

About the second to last paragraph, Steffan writes:

"That's the incident when Koppel, returning from an SCA event/practice on the NYC subway with some other folk, was mugged. He was wearing most of his armor and had his sword. He held 'em off while the ladies dashed up the stairs. Legend has it that's what he was knighted for, but he was already a knight."