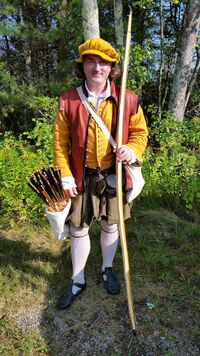 Ready to toss the Spanish Armada back into the sea 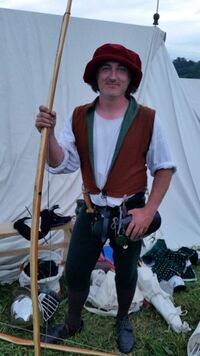 Bartholomew Sharpe hails from a family of artificers and tradesman from the East Midlands of England, specifically Northamptonshire.

The men of the Sharpe family have been tailors, bowyer's, cordwainers, foresters, bladesmiths, amd members of the trained band. They pay their taxes, wear their caps, practice their archery, and do their best not to run foul of the sumptuary laws.

Depending on what decade of the 16th century you are to encounter Bartholomew, he could a minor gentry, grubby peasant, or an aspiring court dandy. The vicious cycle of war, trade, inflation, and religious upheaval in 16th century England, dictate the fortunes of the Sharpe family.

My main focus is on the material culture of the Tudor period. I love to try and recreate items from through out the 16th century. Of particular interest to me is the broader social context that these items meant to people of the time. With every item I reproduce, I want to try and understand the who, what, when, and why of them. While I love to make outrageous clothes of the upper class, I am equally interested in making simple items used by the majority of population. in recent years my primary focus has been on clothing of the common people in the last few decades of the 16th century.

2017 Artifacts of a Life entry. The personal possessions and weapons of an archer. All items were based directly off of artifacts recovered from the wreck of the Tudor warship 'Mary Rose'. This was judged the winner of the elite category at that year's event. For the competition I made a yew longbow, arrows, arrowbag, leather jerkin, ballock dagger, embroidered leather purse, bracer, beech wood comb, and wooden plates.

2020 Artifacts of Life entry. I created a variety of items that would have been seen in a tailors shop towards the end of the 1580. Items included a handsewn peascod doublet, pinking irons, tailors account book, venetian hose of "London russett", sewing stand, knit flat cap, and cast pewter thimble. The 2 stand out items to me were the peascod doublet, and the account book. The book was made with an exterior of red leather and the spine and inside were of parchment. The inside of the back cover was made to look as if it had been recycled from an earlier medieval manuscript (there are several examples of this type of reuse of earlier books). It is bound using linen thread. The contents of the book are all based on period records, and used prices I averaged by looking at multiple records dating from the 1580s and 90s.

Two late 16th to early 17th century English outfits. Based primarily on woodcut prints circa 1595-1610. The first outfit was created to try and show what a common working person would have worn during the end of the Elizabethan era. The doublet is made of a natural colored twill linen. The hose are of a russet wool, trimmed with linen tape. The cape is made from a thick freize wool. The jerkin is of leather. All the garments were hand sewn. The buttons on the doublet and jerkin are cast in pewter, and based off of ones found in archeological sites in England and Europe. The second outfit is from the same time period but of a slightly higher social class. The doublet is made of jean fustian and features extensive slashing. The interlining under the fustian is made from linen that I dyed with logwood. The hose are of a good quality wool and trimmed with silk lace and feature pockets made from soft leather, like some seen in extant garments.
Some of my leatherworking projects. Pictured are a pair of shoes I recently made by hand using vegetable tanned leather, and sewn with linen thread. They are based on a pair recovered from a Dutch shipwreck from the 1590s. A sword belt and scabbard I made during the great plague, almost all of the brass fittings for the sword belt I cast in brass using sand casting and soapstone molds. A leather jerking hand sewn for a gentleman of the Virginia colony, made of veg tan leather and decorated with incised lines and slashes, finished with beeswax and mink oil. A leather belt and purse made using veg tan leather which I dyed with black walnut husks collected locally, the buckle I cast in brass and it is based off of one dated 1550-1650.
1610's doublet made of fustian. This doublet was compeletly hand sewn using linen and silk threads. The outer layer of the doublet is of a wool/cotton fustian, lined and interlined in linen (of various types as I was using up the scrap bin....). Welts of blue linen were sewn into most of the seams, a detail seen on a number of extant doublets from the late 16th and early 17th centuries. The buttons are made of a wooden core with silk thread wrapped over them. It still features a lacing strip inside the doublet to truss to the hose (after 1620 hooks and eyes become the method of choice). The lace for the center front eyelets is made of a flat braid of silk threads.

If for some unknown reason the crown would wish to confer a peerage onto Bartholomew, he would REALLY like to get a writ. As proud as he is of his working class grubby peasant ancestors, he would rather look flash if that was to happen. If your looking to track down further info, please contact Mistress Pagan.