Lord Anton LaFlamme de Saint Aubin began participating in the SCA in the Shire of Quintavia in 1996. He is the second (Eastern) squire of His Grace Duke Brion Anthony Uriel Tarragon. He resides in the Barony of Carolingia, but is often found roaming the central region, teaching silversmithing and improving his martial skills with his consort, Lady Cassandra Blondel de Seint Alban and his three stalwart sons, Lords Arnulf, Rodulf and Leon, all of whom serve to inspire him.

A 12th century Norman. Anton LaFlamme de Saint Aubin was one of many sons of an ancient Norman family, sent to learn the ways of a clerk. At the Abbey he was sent to, he fell under the auspices of a brother who was an accomplished silversmith and jeweler. At the age of 18, Anton was sent out into the world and recruited into the service of a Norman lord. When it was discovered that Anton was nobility himself, he was given a horse and equipped to fight. He then journeyed with the armies of the Norman Crusaders to the holy land to fight. He was in the army that conquered Rhodes, and then Jerusalem. While in theses lands, he expanded his knowledge of metalworking and gemology, and areas of science before returning to France.

Carolingian Rattan Champion at Pennsic XLIV: Can this break? 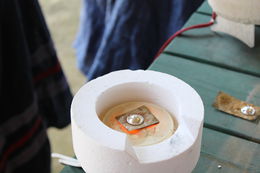