I began in the SCA when Sir Geoffrey FitzGalen and his lady purchased a horse named Satin from a close friend. I began going with them to SCA events. Due to life I ended up taking 6 years off and came back just in time for EK50 and have discovered the rest of the amazing things about the SCA.

I am currently on a quest from His Excellency, Baron Johannes filius Nicholai of the Barony of Bergental to get an equestrian event going in the barony. I have also have started learning heavy list and how to sew.

Angelique is from late 1400s France. Beyond that my persona is still under development. 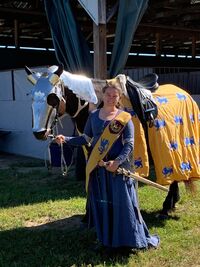 Angelique with The Dread Pirate Roberts 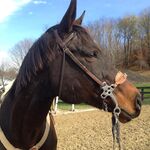 Guinness is a huge goof ball and love bug until he sees the game equipment, that's when the war horse comes out. He's a real gentle giant that loves being loved on and loves kids.

In case of court please contact Baron Johannes filius Nicholai or Perronnelle de Croy. I would rather be surprised so I have less time to think about it.