Started in the Society at Great Northeastern War AS XLIV. In June of AS LI, I became a protege of Syr Kyppyn Kirkcaldy. Kyp moved for work, so that relationship has ended, though we keep in touch. I've become a protege of the esteemed Samuel Peter Bump, and I am member of House Knotty Snake, and making a home with Lady Griet Wever van Orange and possibly too many cats.

I serve as the Seneschal for the Riding of Ravensbridge, the Archery Minister for the Province of Malagentia, and occasionally run or assist in running events like the Great Northeastern War and Huginn and Munnin. I am a court voice herald along with other behind the scenes assistance. It's a great way to see what's going on and see the scrolls. I'm working on my scribal skills, mostly left-handed calligraphy and painting.

I have been known to dance like a medieval loon at events that are foolish enough to permit me.

Recently I stepped up to help with Pennsic Archery, beyond just being there for setup. I took over the role of Pennsic Archery Coordinator from Godric of Hamtun, who'd been doing the job for a couple decades. Big shoes to fill, but there's a lot of help.

Aloysius (he/him) is a 14th Century Venetian, a traveling merchant who doesn't much like merchanting, so is always looking to do other things while traveling, and so pokes his nose into artisan's shops, clockmakers, tentmakers, and much else. 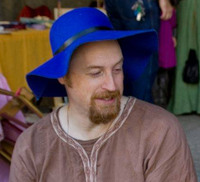 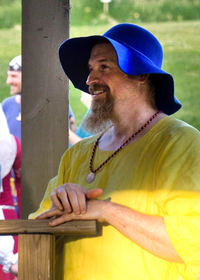 He can often be found with a crossbow and pointed sticks at places reserved for such things.

Any awards may be given in Ethereal Court, as may please Their Royal Majesties, with a caveat regarding peerages.

Surprises are fine, please contact Lady Griet Wever van Orange, Master Samuel_Peter_Bump or Don Magnus Morty for scheduling, questions or general shenanigans. ICOP: A writ is probably best, it will allow those around me to make sure everyone who should know can be there.