AKA: Eydis of Stonemarche

I have been involved in the SCA since 2004. My primary interests have been in Heavy Combat, Embroidery (especially in telling modern SCA stories through bayeux tapestry style work), and in learning enough about recreating medieval clothing to keep up with my 14th cen. crazed husband's desires for persona appropriate garb. ;) 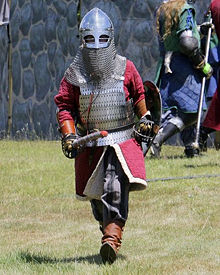