Gawain for Iddo of Stonemarche

The original illumination is of Duke Hrvoje Vukčić Hrvatinić a Grand Duke of Bosnia, Ban of Croatia and Duke of Split. It can be found in the Hrvoje's Missal manuscript circa 1404. My rendition consisted of color matching gouache paints on bristol paper.

I am proud to present this piece after having to wait a full year for the candidate to receive notice of his award. Toki's Silver Tyger was based on a depiction of a General launching his troops to assault Nagashino Castle in 1575. The original image was from the Tsuki hyaskushi series ("100 aspects of the moon") by Taiso Yoshitoshi circa 1887. My rendition used mixed gouache paints and bristol paper. To personalize this piece more to Toki I added his Do's colors, his likeness for the face, his weapon of choice the polearm, and the East Kingdom banner.

This piece was based on a manuscript stored at The J. Paul Getty Museum titled "Decorated Initial S." Its English illuminator is unknown but is believed to have been penned between 1420 - 1430. The unknown illuminator used Tempera colors, gold leaf, gold paint, and ink on parchment bound between pasteboard covered with red morocco. To recreate this image, I mixed gouache paints to best match each individual color before placing them on bristol paper.

Devillin's illumination was based on a page from the Sacramentary of Saint-Denis. This piece was produced with miniatum and gold leafing on the border, accompanied by gouache paint on bristol paper.

This gorgeous Tyger's Cub was based on an exert out of the Flemish Book of Hours circa 1470-1480 known as Saint Elizabeth; attributed to the Workshop of Master of the First Prayer Book of Maximilian (Flemish, active about 1475 - 1515). The original manuscripts were a collection of assorted French artists who based their works off French illuminator Simon Marmion's pieces from 1449 and 1489. My rendition was executed with gouache paint on bristol paper.

I wanted to do something special for Nasir since the request came in for something Arabic. While not drawn directly from one manuscript, this piece was based on several 14th Century Islamic illuminations. My rendition was executed with gouache paint on bristol paper.

I have a special place in my heart for this piece as it was for my apprentice-brother. I once again drew inspiration from the Book of Hours, as their art is awe-inspiring. This illumination is known as Bathsheba f.91 circa 1508; attributed to the Master of Spencer 6. My rendition was executed with gouache paint on bristol paper.

Hlifa's arms were an original piece created by myself, inspired heavily off of Norse depictions of the raven. My rendition was executed with gouache paint on bristol paper.

This piece was based on a 14th-century Ottoman motif. Inscribed within were the topics of my oath: Self Betterment, Honor, Humility, and Friendship. Gouache paint on bristol paper.

This Carillion Baronial award is near and dear to my heart as it was my second piece created. This unique award was asked to incorporate the Gryffindor colors, be Harry Potter themed, and incorporate a fence post driver. This fun, tongue-in-cheek award was all created with gouache paint on bristol paper.

This second Bell Gules was another tongue-in-cheek done for a good gentle who received a severe case of sun-burn helping the Barony. This piece was created with gouache paint on bristol paper.

Onto the thrown weapons champion of Carillion came this next baronial piece; done with various sized pigment liner sketch pens and gouache paint on bristol paper.

To execute this I utilized a duct tape body form that I had created for myself a couple of years ago to help to create my garb. I then covered it with an old t-shirt and wrapped it in duct tape. Using a sharpie I drew out the torso, sides, and backplate how I desired it to lay upon my form. I then cut those pieces off of the body form and used them as a stencil atop of 8oz vegetable tanned side skirting to draw out my pieces. Using a sharp razer I hand cut each of the pieces, cleaning all of the edges with a Dremel tool to round the edges. 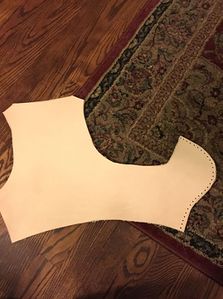 Shortly after, I realized that I wanted to personalize my kit with my heraldic crescent moon. To execute this I drew out my shape onto the leather before using a damp cloth to moisten the surface area. I then proceeded to trace out my shape with the cutter tool. After, I used the embossing tool to pop all the edges and make the entire design look much cleaner. Overall, I was extremely satisfied with my first attempt.

I then painstakingly punched all the holes where I would be sewing up my piece. Using a needle and the wax thread I sewed the piece up until I had a stand-alone chest and back. To add some more rigidity I used a damp cloth to wet the leather and used a blow drier to act as a hardener.

After this was done, I used Tandy's black dye and colored it. In the meantime, I took leftover lamellar from my husband Hassan's old kit and put together a 2 layer kidney belt with parachute cord. One the dye had dried I punched more holes where the belt would overlay and hand-wove the parachute cord to the lamellar. I then cut 4 pieces of black leather and made shoulder straps and belt straps for an encloser. That rounded off the completion of my heavy kit!

This was a passion project for my husband Hassan who got Knighted August 9, 2018 at the Pennsic War just before the bridge battle. He is very much into the flashy Persian attire so I wished to make him an outfit that would do him justice.

When a man outside of the Ottoman race would marry in, they would have to agree to "become" Turkish in culture. Hassan typically illustrates this by blending 14th Century Syrian with 14th Century Ottoman. He has gone as far as replacing his Syrian helmet with a Turkish Chichak Helmet. To complement this I wished to make him a fitted caftan. Along the edges is the rising sun. Tiraz bands would typically wrap around the man's bicep either containing a passage or illumination. On one arm is his rising sun, on the other is written his personal motto "Respect everyone, Fear no one" in Arabic.