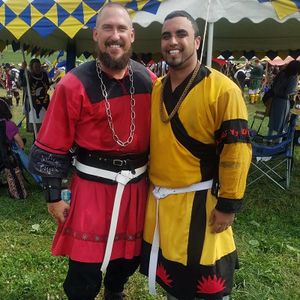 All of the garb which I wear is made by me. I am fond of wearing attire that ranges from as early as 600 A.D. up to the 16th century. My inspirations come from Persian, Indian, and Turkish persuasions. I utilize paintings, coins, and tapestries as source material before making an ensemble.

I also enjoy studying middle eastern music and have played the Dumbek for 18 years now.

Suggested tokens of esteem/Good Bribes: Being Persian, I have an eye for the shiny. I love middle eastern jewelry and bling. As well, I am a scotch man, so most single malts are a good start.