Tenan of the Couter of Chivalry, Bishop of the Priory of St Colin the Dude, Pilgrim to the Shrine of St James (Santiago de Compostella)

I have been involved in the SCA since 2004. My primary interests have been in Heavy Combat, research, and armoring. I am most interested in the history of arms, armor and the knightly culture of the 14th century. A primary goal of mine has been to find the intersections of medieval chivalry and modern chivalry and do my best to bridge the two. As a journey of healing and of better understanding the life of my SCA persona, in 2014 I walked the medieval pilgrim trail of the Camino de Santiago de Compostella.

I am always interested in meeting new people, learning from everyone and in sharing what I can. 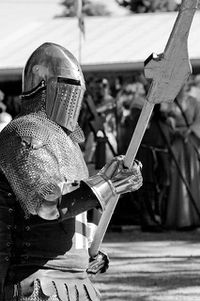 Herr Friedrich Parcifal, Coronation of Nigel I & Adrielle I, Ealdomere 2008.

Friedrich Parcifal is an Austrian Lord who has sought battles, deeds and adventure all over the continent and beyond. He helped to found the crusading order of the Priory of St Colin the Dude, was tenan and protector of many relics, and made many friends across the known world. After a time of pilgrimage and reflection he has returned home to his estates in the East Kingdom to a life of hunting, teaching and sharing the various riches he has accumulated from his wanderings.