I have been actively playing since 2012 when I was invited to the Crown Tournament in the Barony of Ruantallan that May. I had previously been involved while I was away from home at the University of Guelph in the Kingdom of Ealdormere in the early 90s. I love history and thought it was a great way to meet new people when I attended university. I thoroughly enjoyed myself at the events and went to a few A&S nights. It wasn't until I attended Crown in 2012 that I truly became enthralled with the SCA. I found a wonderful group of people who share my passion for history. I love participating and contributing to our Canton and Barony. I love the pretty things and enjoy being a scribe. I've dabbled in embroidery and participated in the East Kingdom Artisan's Exchange as well as two group projects for the East Kingdom Royal encampments. I am the scribe for the East Kingdom Royal Foresters and helped create their Charter signed by our then King and Queen, Omega and Etheldreda at the Seige of Castle Theo d'Or in 2015.

My children play with me as well. I feel the SCA is a great place to raise children. They learn so much from so many different people and it's 'our thing' to do together. My son, Sam (Seamus Derry) is very proud to say he's an Archer for the East Kingdom and he's a wonderful dancer (He is a popular partner at our events). My little one, Evangeline also likes to play with her friends, some she only sees at events and enjoys camping, archer and dancing. She also gets into my scribal stuff on occasion. 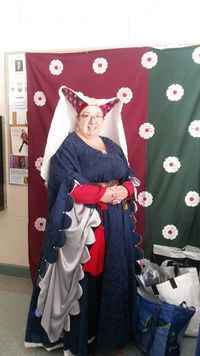 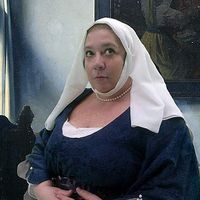 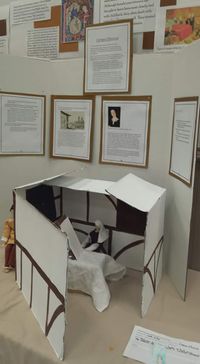 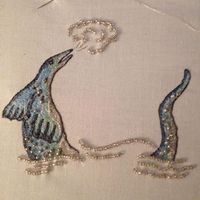 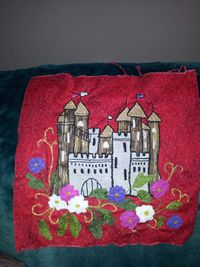 Lady Juliote de Castlenau D'Arry (Lady Lilou for short) is married to very busy lord who is away most of the year managing his family's plot of pastille. She hails from the Langedoc region of southern France in the middle of the 15th century.

Her absent husband has a lucrative contract with the lords of the area for pastille and therefore has a few coins for her to spend in town. Lady Lilou enjoys the finer things and may, at times, exceed her husband's patience with her management of the household finances. She also works with the local Forester group with preparation of documents for the lords of the area.