As a low born Norse son, Torfi spent his lifes wealth and traveled to join the Byzantine Army as a Varangian Guard. A decade later he married a middle eastern woman by the name of Kelek. After many profitable years in the service of the Varangian guard Torfi headed back to his homeland of Sweden. Yet on his travels as he passed through Germany, a harsh winter storm took the life of their horses hence stranding him and his wife. Seeking a place of refuge he had met a moorish Knight by the name of Sir Jibril al Dakhil. Through the long storm he had come to know the Knight as a friend and mentor. Making the decision, Torfi gave up the journey back home to settled down locally where he was taken as a Squire to Sir Jibril al Dakhil. 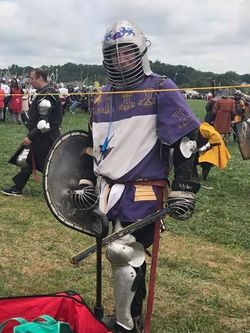