Difference between revisions of "The Chain of the Faithful"

Of the knightly virtues perhaps none is more commonly forgotten than faith. Those who know the great trials who have been tested and found wanting who have dared greatly and strode gallantly know that when there is nothing left there is still always faith. Faith need not be in a higher power, faith can be in a man, a team, a crown, an ideal. Faith grants the power to persevere in the face of all adversity. The Unbelted Tygers are a union forged in blood and steel. They push from the back and pull from the front, leaving each their mark upon the team until they achieve the accolade and are removed from the team by means of promotion.

In 2018 The former captain of the Unbelted Champions Sir Ryouko'jin Of-The Iron-Skies gathered the links of his deputies and those that came before him to begin the chain.

Those Tygers who have transitioned into chivalry from the teams champions both heroic and melee have donated the links of their chains of fealty to weave a chain to be worn by Unbelted Champions captain. The chain is adorned with a reliquary containing earth from the Pennsic field. 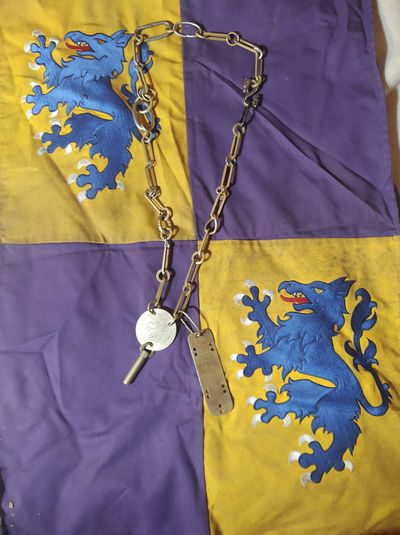