Lord Svanr Hrolfsson, known to friends and family as Svalinn, is a Squire to Sir Brien MacShane. He joined the Society for Creative Anachronism in the summer of 2016 with his first event being Closing of The Inne at Coldwood that fall.

At any given event, Svanr can be found on the battlefield, in camp enjoying a delicious brew and food, or helping out in the kitchens with food preparation and setting up for feasts.

Married to Morwenna verch Madoc and father of Elias and Madoc.

Svanr Hrolfsson grew up in the thriving Norse port settlement of Dublin, Ireland in the late 800's. With his brothers and sisters at his side, he lead small bands of warriors to raid and attack surrounding settlements and defend Dublin from Celtic uprisings. Svanr proved to be a capable soldier and leader, enjoying feasts and splendor from his escapades. An accomplished trader as well, Svanr built up his wealth with the hopes of eventually settling down to farm and start a family.

Upon the Norsemen being driven from Dublin in 902, Svanr found himself in Wales. Due to being a foreigner, finding shelter and work were difficult tasks. This was until he met Madoc, an aging farmer who sold grain and horses to the Viking traders in the towns of Haverfordwest and Milford Haven. Madoc was impressed with Svanr's tenacity for trading and negotiating fair prices and trades on his behalf with the Norsemen. Having lost his wife and son in childbirth, Madoc sponsored Svanr, in order to help run his farm along with his daughter, Morwenna, who was known as Aerona by her family and town. With Madoc's blessing, Svanr married Aerona. While Welsh Law did now allow for daughters to inherit wealth and land from their families, Aerona's marriage to Svanr allowed for her to keep and maintain her family's farm.

Please contact his consort, Morwenna verch Madoc, for any court related activities pertaining to him. 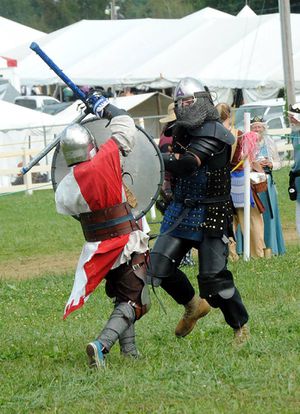 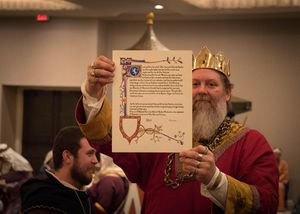