When Rudiger was 16, he discovered the SCA at a demo in his hometown. Three years later, a friend, who was a squire of the local baron, got him started in the society. That was 24 years ago. Modern life has recently moved him to the Kingdom of Atlantia, but he is still closely tied to the East. 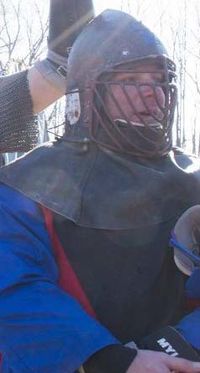 Rudiger is a 5th Century Germanic warrior from Burgundy on the Rhine, during the time when Attila the Hun conquered most of Europe.

Rudiger prefer surprises for most things, but ICOP a Writ would make him more comfortable. Lady Esa of the Barony of Stierbach in Atlantia, or Baron Dankwert Bathory of Surtr's Brood and either know how to contact the other.