Difference between revisions of "Rowen and Suba" 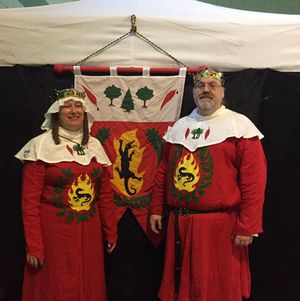 Announced by Brion III and Anna III on April 1st, A.S. LI (2017) at Spring Coronation of Ioannes and Honig in the Barony of Dragonship Haven.

Invested by Ioannes and Honig on June 3rd, A.S. LII (2017) at Bhakail Investiture and K&Q Rattan Champions in the Barony of Bhakail.

Admiral of the Bhakail Navy