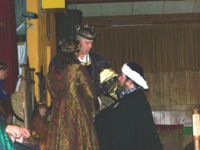 I was elevated at Mudthaw on March 29th, 2008 by TRM Andreas III and Gabriella. I was totally surprised and caught off guard. My Pelican, Mu'allim Rabah az-Zafir and his wife came up from Virginia, as did Mistress Olwyn ni Chinneidigh; Master Evan da Collaureo and his wife Lady Alys of Foxdale; Master Herveus d'Ormonde and his wife Mistress Megan O'Donnelly. Metressa Jadwiga Zajaczkowa cooked a wonderful "vigil board" and Lady Sara bas Mordechi made homemade chalah for me. Doña Estrella de los Confinos pulls a "Scotty" and makes me an absolutely wonderful Pelican cloak in under a month, if I remember correctly. Lady Alesia de Maris of Ravenstar made me a gorgeous banner and Mistress Kis Marika (called Mika) makes me a pillow with my arms on it!

Currently, I do not have any protégés. However, before I was elevated, I took Lord Corwyn Ravenwing on as a student. This has been as much a learning experience for me as it is has been for Corwyn.