Divested by Thorvald and Svava on January 15th, A.S. XXXIX (2005) at Bellringers: the Investiture in the Barony of Carillion. 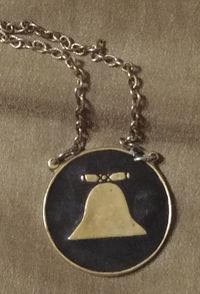 Ramos & Aminah's golden chime was a medallion worn on a chain.