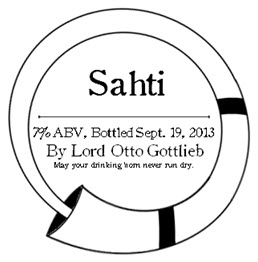 According to Peter Ovell in “Finland’s Indigenous Beer Culture” (1996, Finnish Society for Traditional Beers), Sahti has been traced back to the Viking Age (9th to 11th centuries). It is brewed with pilsner, barley, and rye malted grains with juniper branches in a traditional mash tun called a “kuurna”. The wort is boiled with juniper berries and hops (in modern times).

A barrel, recovered from the Oseberg ship by Dr. Gabriel Gustafson in 1904, revealed evidence of sahti. The ship and barrel are thought to have been part of a Viking burial dated to 834 AD.

Deviations: Kevin Cullen, Archaeology Associate for Discovery World, posted a recipe online called “Scandinavian Sahti”. I followed the recipe with the exception of using a step-infusion, because I do not have a kettle that I can easily transfer grist from. In period, brewers would have used a hollowed out aspen log called a ‘kuurna’ instead of the ubiquitous, modern Igloo cooler mash tun.

Water was heated to 180° and added to a mash tun with a false bottom. When the temperature dropped to 170°, the juniper branches were added and sunk to the bottom followed by the entire grain bill. The grain was stirred to remove pockets of dry grain. After about 10 minutes, I checked to make sure the temperature was between 150 -155°. The grain steeped for another hour before sparging (“rinsing” the grain sugar). Sparging took about 15 min. per gallon and one and a half hours to collect 6 gallons of wort. The wort was then heated to near boiling when the hops and juniper berries were added. The boil lasted for one hour then cooled to 75° with a wort-chiller. The wort was then drained into a fermentation bucket. Finally, the rehydrated yeast was added before sealing the bucket and attaching an airlock. The sahti was racked to a secondary fermentation bucket after 5 days and bottled after 6 more days. The sahti will be fully bottle-conditioned (carbonated) by October 10th.

Notes: The juniper branches were collected from a local arboretum and parboiled before adding to the mash tun. The rye malt was smoked with spruce, white pine, and juniper berries. This is some quality ‘tupulisahti’!