Order of the Pelican 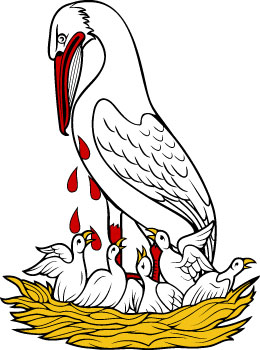 Order of the Pelican

Companions of the Order of the Pelican (or 'Pelicans') have been recognized by the Crown for their exemplary service to the Kingdom and/or the Society, along with their consistent display of the virtues of Grace, Courtesy and Chivalric Demeanor. Their elevation is accompanied by a Patent of Arms (the highest level of arms).

Generally, the Pelican candidate's service is long-term, on-going, and has made a great difference to other members of the SCA. They can have rendered such service by running events, holding offices, or assisting with the organizational aspects of their local or regional group, their Kingdom, or the Society as a whole.

As for the virtues, the SCA Governing Documents state the requirements for any Peerage candidates:

The Governing Documents also state that the duties of the members of the order include:

Symbols of the Order

Some members also wear a brimless round hat trimmed with fur and/or banded with white feathers, called a Cap of Maintenance.

Elevation to the Order

History of the Order of the Pelican

The Order of the Pelican was established in 1972 by the SCA Board of Directors. It was initially intended to be awarded by the Board to honor service to the central organization of the SCA. In 1974, Corpora included both the "Imperial" Pelicans, and a version awarded by the Kingdoms. By 1977 the Board had ceased giving the award.