Difference between revisions of "Lu An-Hua"

Lü An-Hua 呂安華 was born and lives during Tang Dynasty (618-907CE) China in the capital city of Chang'an. Her name An-Hua means "peace in China." The Lü surname originated from the ancient State of Lü. Lü Shang (fl. 11th century BC), the founder of the State of Qi, was the first person known to have the surname. Lü is the 22nd surname listed in the Song Dynasty classic text Hundred Family Surnames.

The Tang Dynasty was the Golden Age of Chinese literature and art. During the Tang Dynasty, trade flourished along the Silk Road, with goods flowing to and from China to the West. Chang-an was the largest city in the world at its time with an estimated population reaching 2 million inhabitants. The Tang capital was very cosmopolitan, with people from Persia, Central Asia, Japan, Korea, Vietnam, Tibet, India, and many other places living within. Naturally, with this plethora of different ethnicities living in Chang'an, there were also many different practiced religions, such as Buddhism, Nestorian Christianity, Manichaeism, Zoroastrianism, Judaism, and Islam. Additionally, with all this trade, it was fashionable for Tang Dynasty women to wear foreigner clothing from other ethnicities.

An-Hua is interested in all the different cultures that could be found in Chang'an during this time. She especially likes wearing clothing from foreign cultures (hufu), along with traditional Chinese clothing (hanfu).

Lü An-Hua can often be found on the Heavy List field, working at the Mistress of the List table, watering fighters, or passing out homemade (non-period) cookies. She enjoys cooking, inkle and card weaving, wet-felting, trying to sew garb, Chinese knotwork, and more. An-Hua is apprenticed to Baroness Mistress Kis Maria (called Mika). 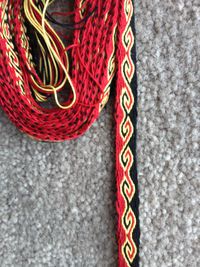