The owner and captain of the ship smiles at another successful journey. From humble beginnings as the son of a shipbuilder in the city of Ryazan', he had enlisted as a sailor for a Rus' trading firm, and had learned the rivers and trade routes from the Baltic to Byzantium. With some luck and hard work, he rose in the ranks and became owner of the firm. He now lived in Kiev, where he had a modest estate and influential customers. His name, however, still honored his father and his city of birth: Ivan Matfeevich Rezansky. 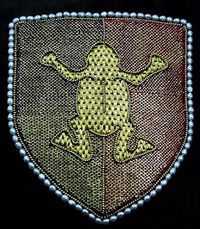